A Choreography for Moon and Venus 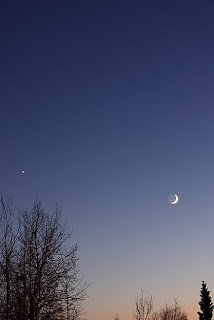 Dear friends,
Tonight, I am presenting my special New Year's Eve spectacle:
A Choreography for Moon and Venus.
On December 31st, after sunset, take a moment to look out of your window. High in the southwestern sky, Venus and slender crescent Moon will perform a beautiful conjunction visible for hours after the sunset of the old year. For this New Year's Eve, we will perform the quiet dance of the two brightest objects in the night sky with spectacular participatory fireworks.
This is the first of my performances in the new series of collaborations with the night sky titled Further Investigations Into Choreography.
A Choreography for Moon and Venus is a slow-motion durational participatory spectacle for two celestial bodies, an observer and fireworks. It is a nostalgic ritual of endings and beginnings that deals with the issue of personal responsibility and engagement in spacewide events.
The performance is made to mark 400 years since Galileo's first observations of the night sky using a telescope in 1609. The telescope was invented in the Netherlands by Hans Lippershey, an optician, in 1608.
Entrance: free
Performance visibility: worldwide if the sky is clear by sunset
Credits: Andrea Bozic in collaboration with the Moon, the Venus and the weather
Happy New Year!
Photo taken by Terry Tedon in Alaska
Posted by andrea bozic at 22:07